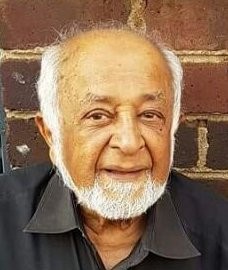 ESSOP JASSAT Family Physician
For a shot video of Essop Jassat narrating his life story, please click here: https://youtu.be/y4XIPsZBCNo
Essop Jasset was born on 5 October 1932 in 11th Street, Vrededorp, Johannesburg. His parents were born in India.  In South Africa, his father first found work as a hawker and then shopkeeper. Essop attended the Johannesburg Indian High School and was one of only 12 students from that school to be accepted by the Medical Faculty of the University of the Witwatersrand (Wits). Essop started medical school earlier than most of our classmates. At the end of his first year of studies, he was informed that there was no place at any of the hospitals for him to continue.. He was advised to do a two-year science degree before continuing with his medical studies. He completed this and graduated with us in 1960. While at Wits, Essop served as a member of the Students Medical Committee and as chair of the Student Liberal Organisation.   While still at high school, Jassat was inspired by his father and older brother to participate in the liberation movement. He joined the Transvaal Indian Youth Congress (TIYC) and served as its president. In 1955 the government issued him the first of two consecutive five-year banning orders. 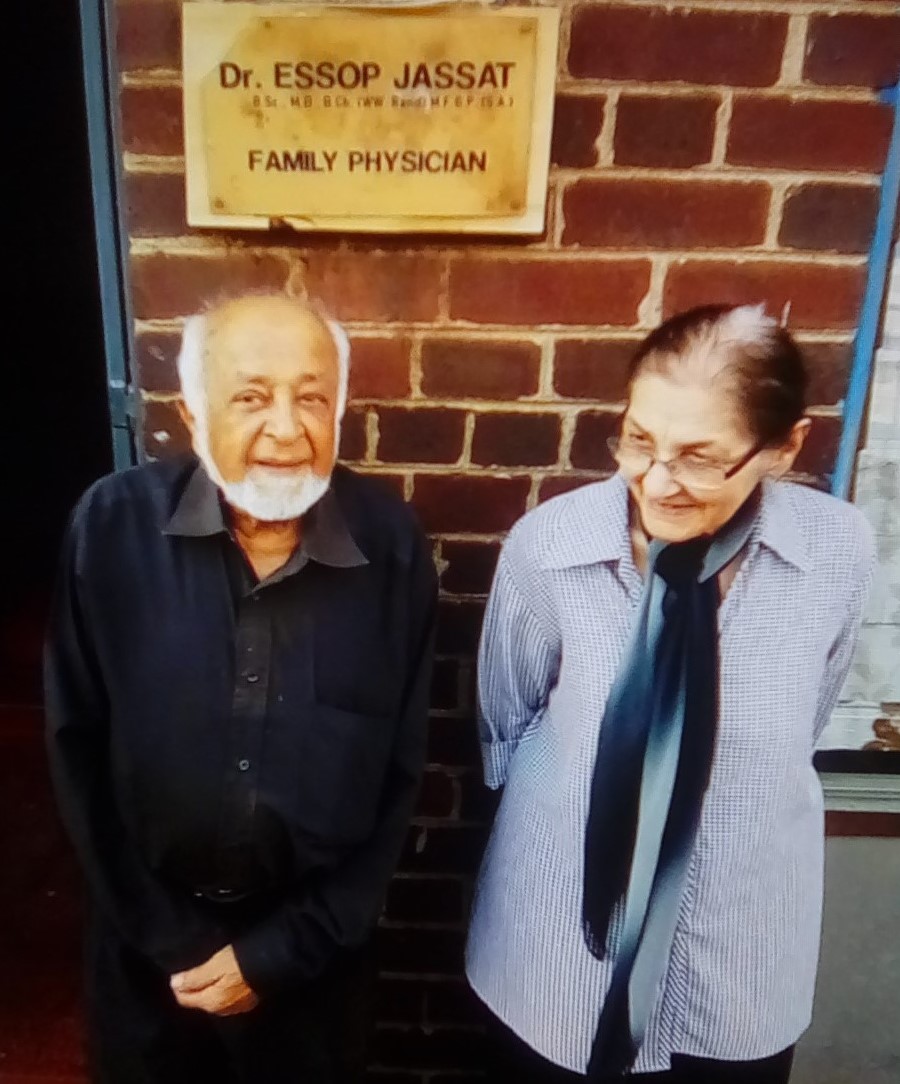 In 1964, he married Shireen Patel (seen above with him) They have a son Aadil, and two daughters, Yumna and Zaheera. Also in 1964, Essop Jassat was sentenced for failing to comply with his banning order.  Represented by George Bizos, He appealed the conviction, claiming that he was unable to report to the police because he was attending to a medical emergency. He lost the appeal and had to serve 10 days in prison as part of a two-year suspended sentence.    This was just the beginning. Jassat remained active in the fight against injustice.  Due to the outlawing of organisations as well as the imprisonment, exile and banning of friends and comrades, political activities were dampened during the late 1960s and the 1970s. At this time Essop worked on launching and strengthening numerous community organisations, in particular, the Johannesburg Indian Social Welfare Association (JISWA), later renamed Johannesburg Institute for Social Services (JISS). With the resurgence of Congress politics in the 1980s, the Transvaal Indian Congress (TIC) was revived in 1983, with Essop Jassat elected as president. The ‘soft-spoken Indian medical doctor’ declared that the TIC was not restricted to an ethnic group; but welcomed people from all creeds and races. The TIC took the path of non-violent resistance, following the example established by Mohandas Karamchand Gandhi (Mahatma Gandhi) at the close of the 19th-century.
On behalf of the TIC, he opposed the introduction of the “Republic of South Africa Constitution Bill.”  This bill, said Jassat, ‘totally excludes the vast majority of South Africans from the decision-making process in our land [and] provides for second class and junior partnership roles for Coloreds and Indians’. The bill allowed ‘no power-sharing [and] strengthens white control and domination. [The bill] is the old apartheid fitted out in new clothing.’ Jassat served on the executive of the United Democratic Front (UDF), a new organisation set up in 1983, to coordinate all the opposition to the new constitution – which entrenched the Apartheid system. In 1984 the UDF co-presidents Albertina Sisulu and Archie Gumede with fourteen other members including Jassat, were arrested on the serious charge of treason. Bail was initially denied. When this ruling was overturned by Justice Friedman of the Supreme Court in Natal, very severe bail restrictions were applied. The plight of these prisoners was recorded in a resolution at the United Nations Security Council in 1985. Later that year charges against 12 of the 16 accused were withdrawn, due to ‘insufficient and unconvincing evidence’.  In the early 90s Jassat was invited to serve as a delegate at the Convention for a Democratic South Africa, to negotiate the end of apartheid. In 1994, He was elected a Member of Parliament, serving until 2002. He then returned to his medical practice on Bree Street in Fordsburg. Dr. Essop Essak Jassat, our classmate, was recently awarded The Order of Lithuli in Silver for ‘his excellent contribution to the struggle for liberation and advancing democracy in South Africa, through selfless sacrifice without regard for his own safety and well-being’. The award is named in honor of Chief Albert Lithuli, former leader of the African National Congress, and South Africa’s first recipient of the Nobel Peace Prize. Described as ‘a leading activist during the struggle’ and as ‘a legend’, Dr Essop Jassat retired in 2017 at the age of 84, after practicing medicine for 55 years. He recently celebrated his 88th birthday.  On June 17, 2020, his daughter, Yumna Jassat, wrote that her father Essop ‘sends his greetings’ to his medical school classmates.  ‘He is currently afflicted with Myasthenia Gravis and his symptoms include the paralysis of his eyelids preventing him from reading, his favorite pastime. We hope the treatment will succeed.’ This article was sent to Essop for his approval. On June 29, 2020, Yumna Jassat responded that her father ‘read the article and is very appreciative for what you have put together.’ Compiled by Chaim M. Rosenberg, Chicago Edited by Geraldine Auerbach, London, July 2020
WitsUSA